The Manitoba Canary and Finch Club is a group of like minded individuals interested in canaries and finches and the promotion of aviculture in general.

Golden Rule Seniors has folded so we are no longer able to rent that room. However, we have secured a new meeting location at 366 Oakwood Ave., Grace Bible Church. Tables and chairs will be available. It's smaller than our previous room at Fort Rouge Leisure Centre but should still be sufficient depending on how many members attend the meetings. There is parking on the street and Safeway has agreed to allow us to park in their lot along the Osborne St. side; just not near the entrance to the store. It is also close to the Osborne bus stop. We were able to negotiate the rental fee from $40/hr to $25 per evening so the price is within our budget. Tuesday evenings were available so the 2nd Tuesday of the month has been booked, from 7 pm to 9 pm, beginning April 12, 2022, excluding the months we don't meet.

The CHRISTMAS DINNER has been confirmed at the Olive Garden, 1544 Portage Ave., across from Polo Park, for Wednesday, December 8, 2021 at 5:30 PM. Unfortunately the limit imposed by the Olive Garden has been reached and we are not able to accept additional reservations. If you wish to participate in the gift exchange please bring a wrapped bird/nature related gift valued at approximately $15. Hope to see you there! We have some good news to report. Winnipeg Animal Services will not be making bylaw recommendations pertaining to birds and other specialty pets at the City Council meeting in December. Instead, they will be asking for a significant extension of time to continue working with local stakeholder groups in the development of future recommendations. We support this move, as it means that this complex issue will not be rushed and there will be more time given to addressing the concerns of Winnipeg's avian community. Thank you for your involvement and support with opposing the proposed RPO bylaw. 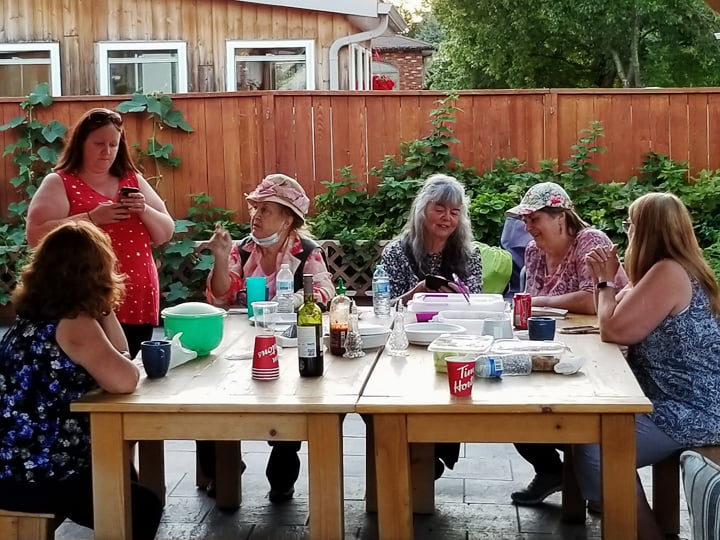 We are a social group who enjoy sharing our love of aviculture as well as each other's company. For general inquiries and membership information please contact us! Thank you to Hector and Ximena for once again hosting the club BBQ in August.  It was so nice to see everyone.  Lots of laughs and great food!

To view balance of images from the BBQ please follow the link below.

The Manitoba Canary & Finch Club (MCFC) was founded in February 1991. Our first meeting took place later that month with a total of 9 perspective members. The idea for the club was discussed and a name was chosen. Since the initial meeting the club has grown to over 60 members.

The MCFC is very unique in that we do not have, nor do we promote, bird shows. We are a strictly non competitive organization. We hold a yearly display of our birds in order to promote interest in our club and aviculture in general.

Club members volunteer for positions. We have never had formal elections or rules of order. We are in it for the fun and camaraderie and to help one another.

We meet once a month including 2 supper meetings per year. Our regular meetings include guest speakers, videos and presentations by the members. We also participate in projects such as making nests out of coconuts and making mineral blocks and breeding boxes. The occasional field trip rounds out our fun filled itinerary.

During the summer months we forego our regular meetings with 2 BBQs hosted by members of the club.

WITH REGARDS TO COVID19 AND HOW IT WILL AFFECT US AND FUTURE SCHEDULING. WE WILL CONTINUE TO MONITOR THE SITUATION AS IT EVOLVES AND WE WILL NOTIFY MEMBERSHIP IF THERE IS ANY CHANGE IN PLANS, HERE, AND ON OUR FACEBOOK PAGE (LINK BELOW).

The Manitoba Canary and Finch Club (MCFC) was formed in February of 1991 in order to promote the interest in, and advancement of, aviculture, specifically that of canaries and finches.

The MCFC is an informal gathering of people who share a common interest in aviculture. Since our founding in 1991, we have worked to promote public awareness of our hobby as well as an appreciation for the miracle of avian flight and the gift of birdsong through the following:

• Bird displays for the public.

• Assisting schools, day cares and seniors complexes in the set-up and maintenance of canary and finch displays for their clientele.

• The arrangement of special functions for the public such as the inclusion of Manitoba artists in its public bird displays.

• To promote best practices for the health and well-being of birds kept in captivity by sharing information and ideas, operating a Bird Care Support Network, holding monthly meetings, inviting guest lecturers, as well as the dissemination of information in our Club newsletter.

• To promote enjoyment, cooperation, and positive social relationships among fanciers in the City of Winnipeg and the Province of Manitoba.